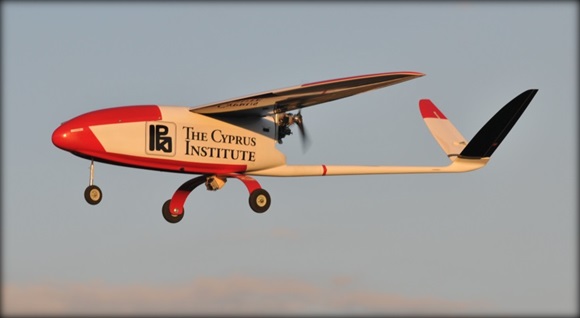 The Unmanned Aerial Research Facility of the Cyprus Institute consists of a fleet of four Unmanned Aerial Vehicles (UAVs) and a Ground Control Station (GCS) for their remote operation. UARF’ dual goal is to determine the ambient physical, chemical and radiative atmospheric properties as well as to conduct Earth-surface observations. The four medium-size Unmanned Aerial Vehicles (UAVs) of the UARF are based on fixed-wing platforms that can fly autonomously using a flight plan from an autopilot; however, they are also capable of flying manually using a radio control transmitter. Their unique modular design enables them to easily switch between instruments for various scientific missions assuming that the total mass of the instruments does not exceed 12 kilograms including the mass of the data acquisition system. In addition, the UAVS are equipped with the required sensors for navigation such as GPS, accelerometer, altimeter, air-speed sensor and electronic compass as well as with temperature and humidity sensors. UARF will participate to the CHARADMexp with two unmanned aerial vehicles. With the current setup and the installed payload, they can fly up to an altitude of 1.5 kilometers with flight endurance up to 2.5 hours.

Instrumentation to be used: