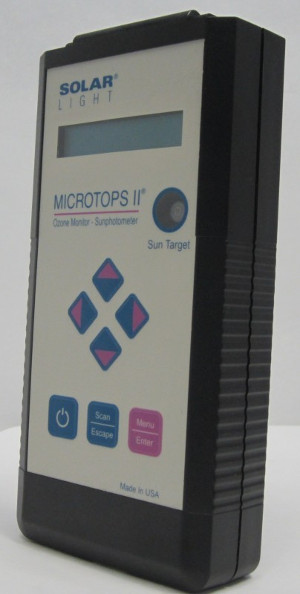 The Microtops II Sun photometer is a portable instrument, measuring 10 cm by 20 cm by 4.3 cm, and weighing only 600 grams. It is designed for use as a hand-held manually operated instrument. The physical and operational characteristics of the instrument are detailed in the "User’s Guide" which is publicly accessible on the Internet. The Sun photometer measures solar radiance in five spectral wave bands from which it automatically derives AOT. The five wavelengths may be specified while ordering the instrument, such that appropriate filters are custom designed and installed by the manufacturer.

Microtops II Sun photometer is operating at 340, 440, 675, 870, and 936 nm. The filters used in all channels have a peak wavelength precision of ±1.5 nm, and a full width at half maximum (FWHM) band pass of 10 nm. The 936 nm wavelength is greatly affected by water vapor absorption. As such, the most significant parameter used to derive W in the instruments is the 936 nm signal data. At 340, 440, 675 and 870 nm wavelengths, AOT is derived based on the Beer-Lambert-Bouguer law